We find ourselves in the middle of the comic book adaptation craze with several big name projects scheduled to be released within the next year or two, but this fascination with the comic book movie hasn’t always been this powerful. Comic adaptations have been alive and well for a long time, don’t get me wrong, but it wasn’t until the year 2000 when a little film by the name of X-Men was released where audiences (and Hollywood) truly fell in love with this action packed sub-genre.

Any fan of comics, Marvel especially, knows that the amount of cross-overs is just plain ridiculous, but for whatever reason is so damned interesting. The movie world seems to have caught on to this and with the release of Iron Man they announced the Avengers project which is making an origin movie for every member of the original Avengers team before making their big Avengers film. It sounds like a fantastic idea in practice and only time will tell on how good the actual thing will turn out, but nevertheless I am excited.

One up-coming Avengers film has got me more excited than the others though and that is Captain America. Cap’s never been my favorite superhero but a genetically engineered super soldier wielding a titanium shield bearing the stars-n-stripes screams bad assery. This film is going to focus primarily on the origin story, young Steve Rogers volunteers to participate in an experimental program that turns him into the super soldier Captain America. While I’m not exactly thrilled that Chris Evans is going to be playing the titular character (that looks dirty) I am definitely looking forward to the rest of the cast. Hugo Weaving as Red Skull? Tommy Lee Jones? Stanley Tucci?! Even if Chris Evans sucks it up big time (which I really, really hope he doesn’t but if its anything like Johnny Human Torch…) the rest of the cast will hold the film. That’s what I’m hoping anyways.

Well since most info about this is still in the dark I don’t have a trailer to put up for it, but I will be keeping a very close eye on this project and will post any updates that I catch.

The Lovely Bones suffers from a bad case of multiple personality dissorder. On the one hand it tries to be a very dark, crime thriller but on the other it’s a fantasy tale of a young teen’s journey through limbo. Had the film stuck to just one of these tones, it may have actually been watchable, but seeing as how it didn’t, it made for an unbearable two hours.

The movie tells the story of a 14-year-old girl, Susie Salmon (Saoirse Ronan) that is murdered by her neighbor George Harvey (Stanley Tucci) and that’s really where it should’ve stopped. It goes on, however, to show us Susie’s spirit running away to magical Limbo-Heaven-Place where she observes how her family and Mr. Harvey cope with her death.

This is where the movie quickly goes down in a spiraling ball of fire. We follow Susie around in her own personal Dayglo Limbo, full of giant rainbow balls floating in front of mystical mountains, and we sit and watch as she plays dress up and dances on giant Vinyl records with some random Asian girl (who’s character isn’t explained AT ALL until about 15 minutes to the end of the movie). These sequences don’t capture any sort of confusion or apprehensiveness that Susie is feeling but instead portrays Limbo as like this totally awesome place where like, teenager girls can like totally have an awesome time like!

Now hold on a second, ok so the sequences didn’t do it for you but at least they looked good right? WRONG! The CGI used in this movie seemed incredibly out dated and nothing amazing or new was done with the effects, leaving them not only confusing but unattractive. The best of both worlds.

Meanwhile back on Earth, Susie’s parents are mourning over her loss and as time goes by they begin to handle their emotions quite differently. Marky Mark plays her father, Jack who becomes obsessed with finding Susie’s killer, completely consumed with rage and bringing the killer to justice, pushing himself further and further away from his family. Or at least, I think that’s what was going on, it was hard to decode Mark Wahlberg’s blank staring. 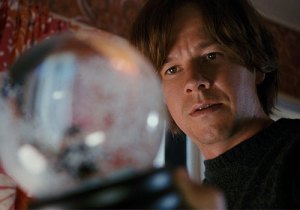 "Man, I miss the Funky Bunch."

Having said that, Mark gave a better performance than I thought, significantly better anyway than Saorise Ronan, who’s dreamy, innocent narration came across as bored and nearly put me to sleep. It’s hard to stay interested in a film when the main character obviously would rather be dancing around on rainbow clouds than taking the time to tell us about her life-I mean death-I mean…you get it.

Abigail (Rachel Weisz) is Susie’s mother and is quite possibly the most bizarre character in the entire film. Instead of taking solace in visualizing the bashed-in skull of her daughter’s killer (like her husband Jack) she wants nothing to do with finding closure and is so engulfed with grief, or one of those other crazy emotions, that she leaves her family. It would be an interesting dynamic if it wasn’t so rushed that it just seemingly popped out of the blue in an “oh by the way I’m leaving all of you to become an apple picker, see ya!” sort of way.

The one diamond in this very, very rough movie is Stanley Tucci who plays Susie’s murder Geroge Harvey. Tucci does an amazing job of playing the obsessive serial killer and completely steals the show. George is a man full of internal struggle, constantly trying to ignore that hunger to kill again until it eventually consumes him and he targets poor Susie. Tucci was fantastic at embodying the character physically, and he was able to communicate such menace just by walking around in a room or by the way he stood, he never needed to say a word. Unfortunately, there just isn’t enough of him in this flick, it spends way too much time on Susie in Limbo instead of sticking to its much stronger character, Harvey.

If I was forced to recommend this movie to anyone it would be solely for Stanley Tucci’s performance. However, seeing as how he’s only in the damn thing for about half of the movie, I’d go tell them to watch Julie & Julia instead.

So, in short do not watch this movie. Oh, and remember, if a forty year old man that lives alone and builds doll houses for a living asks you to come and check out his super cool underground club house … turn around and run away as fast as you freaking can. 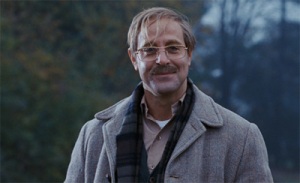 On second thought, he looks like a nice guy.