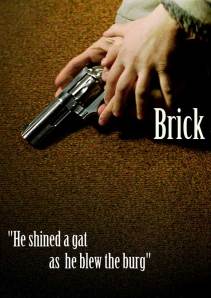 The film opens on the hero, Brendan (Joseph Gordon-Levitt) discovering the dead body of his ex-girlfriend, Emily, in a ditch. Through a brief flashback we learn that Emily had called him earlier for help; he stands at a lonely payphone booth as a passing car (or rather the people in it) cause her to hang up and flee. A cigarette butt is sent flying from the passenger window, the first of many clues Brendan uses to piece together her murder.

From this point on Brendan transforms into a classic noir gumshoe, tracking down Emily’s movements through a seedy high school drug ring with the help of his mysterious brainiac ally, aptly dubbed The Brain. If any of this sounds remotely familiar, that’s because it absolutely is. The plot of Brick is nothing particularly different and special, but the way it is told is refreshingly unique.

The characters in this film are less that and more character types. For instance, Brain is a role typically seen as a newspaper reporter hanging around dark bars or dreary alleyways, which Rian Johnson adapts into a typical high school nerd leaning against the back wall of the school or hiding in his private nook in the library. These archetypes keep coming as Brendan ignores threats and strikes deals with the Principal (a role usually filled by police captains in the old detective films), fights the seductions of tough and sassy dames (in the form of the “queen” of the drama department and the popular girl on campus), battles a crippled crime kingpin, and loud-mouthed tough guys whose bark is bigger than their bite (the star of the high school football team, and dope head junky). These adaptations not only make the dissonance between the character’s actions and their modern portrayal all the more interesting, but allow the noir style to be more accessible to modern audiences. 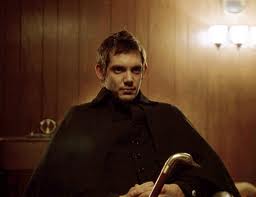 I own that duck cane. Just sayin'.

This isn’t the first modern film that’s combined and adapted elements of noir, just look at Reservoir Dogs, but what sets it apart from the others is that it sets the attitudes and dialogues of classic detective fiction in a modern American High School. The characters all speak like they’re straight out of a Dashiell Hammett novel with lines like, “No, the bulls would gum it. They’d flash their dusty standards at the wide-eyes and probably find some yegg to pin, probably even the right one.”

None of the dialogue throughout is like anything seen in the countless other movies set in high schools, nor can it in any way be described as “modern”. Which is exactly what makes it so mesmerizing. The combination of a modern setting and updated character types with old detective dialogue creates such an interesting dynamic that is more and more entertaining each time you watch.

If you’re unfamiliar with the genre that Brick draws such heavy inspiration from, don’t worry. This film’s got just enough indie quirks in it to keep you interested and if none of that floats your boat then at least watch it for the stellar performances. JGL is flawless as the brooding Brendan, completely embodying the archetype both physically and emotionally, and the rest of the cast all step up to plate, delivering a set of engaging performances.

While the plot may not be anything different, it’s told in such a creative and unique way that you forgive it for that fault and enjoy the noir-iness (made that one up). Find this movie now and go watch it. Please? Thanks. 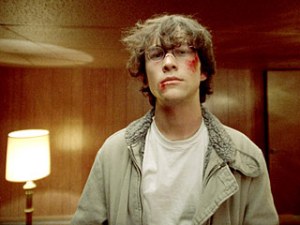